Certain small post-Soviet states have a tendency to be hooked into all the latest fads among global policy wonks. It’s an outgrowth of their size and history: ambitious young people who left for Western Europe or the US in the 90s, have now returned and found themselves wealthy, skilled, and ready to govern. Georgia and Estonia, in particular, have been quick to dive into every technnical/governmental trend, from twitter to linux to…e-voting.

As regards the latter, Estonia is forging ahead. 14% of votes in the European elections were cast online. 44% in the municipal elections in Talinn — which, to judge by the percentage of Berlin’s technorati vanishing there for mysterious projects, must be turning into something of an electronic mecca.

ooh, my turn to be a squeeing fanboy!

and [Paul McGuigan, whoever that is] are working on, I wouldn’t call it a secret project, but a project with

and it’s a thriller set in Scotland” [via warren ellis]

[somehow I appear not to have written about Morrison on LJ, and I’m not quite in the state of messianic frenzy I’d need to explain what

has meant to me. But, er, this is very, very exciting]

Berlin is currently thawing. That is to say, we’re rediscovering strata of litter that have been buried under ice for weeks or even months. Particularly, a lot of used fireworks that have been there since New Year’s Eve. Everything’s not just filthy, but chronologically confused:)

Thanks so much for the comments on the last post. You’ve collectively reminded me that there are almost as many things to be inspired by as there are to be angry about.

Despair at the dullness of Young People Today now seems so omnipresent and dispiriting that it’s come out the other side and become almost entertaining. Or maybe that’s because I’m one of them, resigned to the impossibility of changing or creating anything, and so sniggering in the back row instead. Latest example thanks to steerpikelet in Comment is Free

my peers are driven not to create, nor to rebel, but to stabilise. We want jobs, a foot on the housing ladder, and to protect the planet….My generation may not be turning up at a church, temple or synagogue every weekend, but nor are we running through the streets strewing flowers and reinventing rock music. On the contrary: the millennial generation is replacing the cultural and spiritual orthodoxy of its parents and grandparents with orthodoxies of its own.

It’s even worse when filtered through the movies. The New Yorker on mumblecore, the bold new world of low-budget indie filmmaking and the lacklustre world it depicts:

Mumblecore movies are made by buddies, casual and serious lovers, and networks of friends, and they’re about college-educated men and women who aren’t driven by ideas or by passions or even by a desire to make their way in the world. Neither rebels nor bohemians, they remain stuck in a limbo of semi-genteel, moderately hip poverty, though some of the films end with a lurch into the working world.

Anybody have the antidote? What’s exciting or terrifying or enticingly incomprehensible about teenagers and twenty-somethings today?

Mumblecore movies are made by buddies, casual and serious lovers, and networks of friends, and they’re about college-educated men and women who aren’t driven by ideas or by passions or even by a desire to make their way in the world. Neither rebels nor bohemians, they remain stuck in a limbo of semi-genteel, moderately hip poverty, though some of the films end with a lurch into the working world.

those of us who are reaching adulthood in the 21st century are in many ways more conventional than our parents….orthodox, driven, a little boring, and with a deep desire to save the precarious world that we are about to inherit.

With a few notable exceptions, my peers are driven not to create, nor to rebel, but to stabilise. We want jobs, a foot on the housing ladder, and to protect the planet….My generation may not be turning up at a church, temple or synagogue every weekend, but nor are we running through the streets strewing flowers and reinventing rock music. On the contrary: the millennial generation is replacing the cultural and spiritual orthodoxy of its parents and grandparents with orthodoxies of its own.

One of k-punks many, many worth activities is his full-frontal assault on the rhetoric of modernisation:

it’s necesary to reclaim the public sphere and public services as achievements of modernity (much as they was celebrated by the GPO Film Unit), and, therefore, to re-narrativize their dismantling as acts of barbaric anti-modernisation. Think about it for a second: what is “modern” about the standard neoliberal package of outsourcing, a poorly motivated and casualised workforce delivering a poorer quality service, and exorbitantly overpaid executives? Wasn’t the postal service more modern when you could post a letter in the morning and quite often have it delivered by a well motivated worker the same day?

Radio 3’s The Essay had one of its better runs last week, with Michael Bracewell talking about Germany. With only five quarter-hour episodes, he didn’t have enough space to say much original about the country itself. But he did a great job of pinning down a ‘fantasy of febrile decadence and alienated modernism’ which attracted a certain type of arty British punks there. I was a generation too young to be caught up in this particular fantasy — and had never thought much about Germany before coming here. But it remains utterly comprehensible as a dream; because the worries he describes remain as free-floating cultural sentiments, ready to attach themselves to whatver place or subculture seems momentarily to embody them:

‘somewhere in the middle of punk was the idea, fanciful no doubt and swollen with youthful egoism, that we were growing to adulthood in the ruins of history. In every racing, snarling punk record was the message that modernity itself had accelerated to a point of critical mass, and what was left was a tribe of lost urban youth who dressed as though Dickensian urchins had time-travelled to the 23rd century….It flattered us to believe we were living in a new decadence, of melancholy urban ruin, dark covert little bars, and febrile nightclubs, a place caught in the louche cafe culture of the Weimar republic, where young men and women of ambiguous sexuality spent their days and nights in a cocoon of unreality, the better to shut out the premonition of disaster.

Besides, I’d enjoy the turn of phrase even if he was talking nonsense. In fact,I was intrigued enough to look up Bracewell. Unsurprisingly he turns up writing for Frieze, despite the fact that music, rather than art, is obviously his primary love. He’s also written a few novels; the reviews online don’t tell me much, except that they fall into the stereotypically British genre of people trying hopelessly to find meaning in pedestrian but outwardly painless lives. Putting it enthusiastically:

Bracewell is to Middle England what David Lynch is to Middle America – his is a noticeably eloquent voice disguised by a surreal touch and a poetic sensibility. In Bracewell there is always an attempt to locate some kind of spiritual purpose

done something interesting with this background, but I’m going to chicken out and stick with his writing on culture and pop music. I’m probably in for yet another explanation of how we’re living in an age of nostalgia and cultural collage — but at least it’ll be fun to read.

Sweet Movie sounds like just the thing to jolt us out of bourgeois lethargy:

Makavejev shows us a commune where the members collectively immerse themselves in the fundamental processes of the body: eating, drinking, suckling, sex, vomiting, urinating, defecating, touching, screaming, hitting, caressing.

Makavejev doesn’t exploit this material — “Sweet Movie” is anything but a sex film — but uses it to confront us in a very unsettling way.

This room is good for pacing. I have an oddly-comfortable mattress, good for sitting as well as sleeping. I have a decent expanse of wooden floor. I have a balcony, with a view. To the right, a cemetary. To the left, the sad remnant of a doomed icon of Weimar modernism: a department store, built in 1929 as one of the world’s largest, destroyed in 1945, since rebuilt more shabbily and to prosaically human dimensions.

Excellent weekend so far. Last night, went to a gallery opening, which turned out to be comfortingly familiar, full of gothic fairytale fantasies. And enlightening in that familiarity: I’d not realised how well the various tropes of that world hold together, as a language as internally consistent, and as flexible, as surrealism or futurism or any other art movement.

No politics there. No sex (many naked women, widespread kinky undertones, but all in an austere, inhuman style). Little trace of the 20th century, barring the occasional landscape of post-industrial decay. Religion only as a source of pre-packaged pathos. What’s present is connected to, and for all I know inspired by, Neil Gaiman and Amanda Palmer, Lewis Carroll and Tim Burton. Fairytale metamorphoses; proud grotesques. Clothes from Versailles; metalwork from Robber Baron America. All together, it feels like an exceptionally well-curated Deviantart sampler — and makes you realise that this is actually quite some achievement.

Then a poetry reading, which compensated for so-so texts by requiring each poet to mix a thematically-appropriate cocktail and pass it out to the audience in shot-glasses. Still a bit of a come-down, but followed by an early exit to a self-consciously shabby pub with two new acquaintances.

Tonight it’s time for the goths; I’ve not been out just to dance (i.e. alone) for several months, and instead spent too many evenings at anodyne gigs played by friends of friends. I need my fix of anonymous, black and cynical, and I suspect in the process I’ll satisfy whatever urges made me so love yesterday’s exhibition.

Until then I’m sat cross-legged on that mattress, listening to last.fm psytrance, splurging out words in all directions possible. You’ll eventually get bored of me saying this, but I won’t: Life is good.

From Bruce Sterling’s compellingly-annotated Flickr set studies in atemporality, presumably a companion to his Transmediale speech: 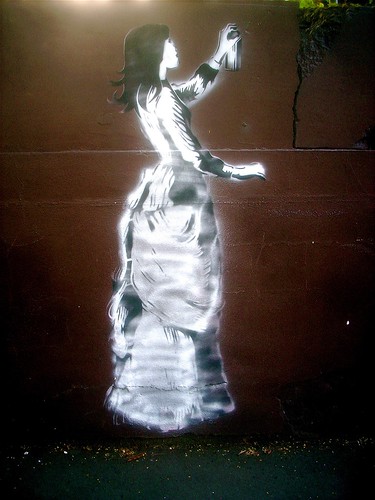 What I love about this is that it’s obviously part of that Strychnin aesthetic of steampunk victoriana and Gaimanesque fairy-tales, but has managed to bridge the gap between there and the real world. Oh what a world, where introducing punk into steampunk can be a revelatory gesture.